A Mission Opportunity
The V Festival is a rock festival, organised by Virgin Records, that takes place on the third
weekend of August each year at two separate sites, one of which is Weston Park, between
Telford and Stafford. The festival has been running for 10 years and attracts around
150,000 people annually, split between the two sites. Headlining bands this year included
Franz Ferdinand, Athlete and Oasis.
The idea for a Christian presence at this festival came during a theological seminar in
Wolverhampton on engaging with the contemporary search for spirituality, when two
curates challenged me as to why the diocese wasn’t providing a Christian presence at
such a major event. Richard Moy and I approached Garry Thompson, the local vicar, who
has care of the parish church within the grounds of Weston Park. Garry was enthusiastic
about the idea and agreed to approach Virgin to ask if they would be willing for the local
churches to provide a tent at the festival offering “a place to chill, to pray and to explore
spirituality and faith from a Christian perspective”.
The organisers were surprised by the request as there has never been any religious
activity at the V Festival but after careful consideration our request was approved and we were generously offered a space for a 15’ by 20’ tent in the middle of the site on route
between the camping areas and the arena and adjacent to one or two other charities.
Electricity was laid on for the tent and 10 tickets were provided for volunteers to staff the tent over the weekend. 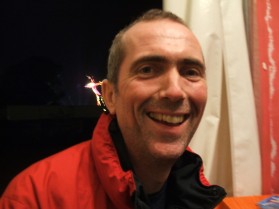 Preparation
Having no previous experience of rock festivals, I began by teaming up with David
Banbury, a gifted evangelist with CPAS, who agreed to work with me. We visited the team
who run the ecumenical churches’ tent at the Glastonbury festival. This tent, called
Sanctuary, has been running at Glastonbury for about 10 years and provides a night
shelter for up to 140 people (much needed this year!) and times for craft activities and
daily prayer. I was invited to attend the Glastonbury festival as part of the Sanctuary team,
and was able to meet three other Christian group who are also active at the Glastonbury
festival. I wrote up my reflections in an article published in Church Times on 8 July 2005.

Desired Outcomes
Reflecting on my experience at Glastonbury and on discussions with Steve Hollinghurst,
Church Army’s researcher in evangelism to post-Christian culture, we decided on the
following desired outcomes for the V Festival:
 To be an openly Christian presence at the festival; for a large number of unchurched
people to have a first contact with Christians and the Christian faith, and for this to be a
positive experience which makes it more likely for them to want to explore Christianity
further at a later date.

 For a large number of spiritual seekers to visit the tent and be able to take part in a
variety of creative approaches to prayer and mediation within the Christian tradition,
using different prayer stations,
 To have significant conversations with some of these people, either seeking a listening
ear or seeking prayer ministry.
 To help a few people who may want to make a definite step towards the Christian faith
and to put them in touch with the Christian Basics course or a church in their home
area.
The Team
Garry Thompson played a key role in negotiating with Virgin on our behalf and also in
sourcing the hire of an appropriate marquee. David Banbury (CPAS) took responsibility for the content and furnishings for the tent. Revd Pete Orton and Sister Mary deCourcy
MacDonnell from the diocesan Spirituality Team took responsibility for recruiting and
training the rest of the team. The other six members were younger people – Graham
Rutter (youth worker) from Codsall, Vicki Lloyd (clinical psychologist) and Michelle Morgan (student) from Great Wyrley, Nick Jobling from the Church Without Walls, Stoke-on- Trent, Joe Jackson (school leaver) from Walsall St. Matthew, and Gemma Evans (student).
The Approach
We decided to call the tent ‘Spirit’ with the strap line “Space to chill and to explore
spirituality”. We had a large professionally made banner and matching t-shirts for the team. The tent was also decorated with various optical illusions as conversation starters, and with a list of the bands on each stage, which was a useful reference point for passers-by. In front of the tent we had a table offering free cups of cold water to passers-by and a prayer tree on which we invited people to write prayer requests, promising that we would pray for all the requests on the tree twice each day.

Inside, the tent was divided into four zones – a ‘chill zone’ decorated with blue hangings,
comfy chairs and nibbles to eat. The other three zones were decorated with tie-died
hangings and comprised a series of interactive prayer stations on the themes of faith, hope and love. In the ‘faith zone’ people were invited to mark their thumbprint in ink on a flip chart and think about the uniqueness of each person, with some verses from Psalm 139. There were also more optical illusions and the opportunity to take a seed and think about the hidden potential inside each one of us. In the ‘hope zone’ there was a globe and a chance to make Plasticine figures and pray for Make Poverty History, space to light a
candle to express your hopes, and also space to dissolve a sugar cube in water as we
release our fears to God. In the ‘love zone’, people were encouraged to meditate on
verses from 1 Corinthians 13, to draw their own ‘love is’ cartoon and to make their own
scoobie – plaiting plastic threads together to make bracelets – and thinking about how God is interwoven in the different parts of our life. There was also a table with response cards from the Christian Enquiry Agency for those who wanted to take things further.
The Response
Having set up a really attractive tent, we met to pray and wondered nervously whether
anyone would actually venture into the tent over the weekend – we need not have worried! The response was overwhelming. Giving away cups of cold water was very well received and over 2,500 were given to passers-by. Many people were curious because we seemed to be one of the few tents around that was not trying to make money but was actually offering hospitality. We quickly found ourselves engaged in conversation about spirituality and about God with many of those who stopped for a drink and then paused wither to chat or to add a prayer request to the prayer tree or to come into the tent to chill or use the prayer stations.
The team gelled together really well and worked extremely hard. We had a steady stream of visitors from 10am when we opened until mid afternoon when the main bands were playing and we were especially busy from 11pm-2am after the main stage had closed. Although the tent was quite quiet from mid afternoon until the end of the concert, we stayed open on both days because of a number of really worthwhile conversations with individuals who wandered in.
Having written recently about the contemporary search for spirituality I was greatly
heartened to find just how keen young people were to talk about spirituality and God –
indeed I have had more conversations with non-Christians about God in one weekend
than in the whole of the previous year. We prayed individually with many people, at least one of whom wanted to make a definite faith commitment, and many took follow-up cards from the Christian Enquiry Agency.

We also advertised a service of holy communion at 12noon on the Sunday, which was a
good time before the main stage got going. However despite being well advertised, we
only attracted 3 festival goers to the service (besides the team) – 2 of whom were friends
of team members. The communion service was a really significant spiritual highlight for the members of the team, but interestingly did not seem attractive to the many festival-goers who came to pray informally in the tent over the weekend.
The Implications
 The combination of offering hospitality and a variety of prayer stations proved very
effective in enabling conversations about spirituality and about God – much more so
than a traditional approach of giving out tracts or engaging in open air evangelism.
 There are a lot of people who are interested to talk about spirituality and open to
spiritual things who aren’t ready to come to formal acts of worship – we had significant
conversations with about 500 people in the tent over the weekend, many of which
involved prayer – yet only one person not known to us came to the Sunday service.
 Like the Spirit tent, most churches in the diocese have signs outside offering Sunday
services and are perhaps disappointed that not more people attend.
 How can we help our churches to open their doors during the week as places of
hospitality and spirituality, with a choice of prayer stations and a listening ear, to
engage with those who are searching for spirituality but not ready yet to respond to an
invitation to ‘holy communion at 10am on the second Sunday’?
What Next?
Having put together a format that seemed to work and be very effective, I am keen to
consider other places or occasions within the diocese where we might offer something
similar. Would something like this be appropriate for the Staffordshire County Show or the Shropshire County Show? What other possibilities might there be? 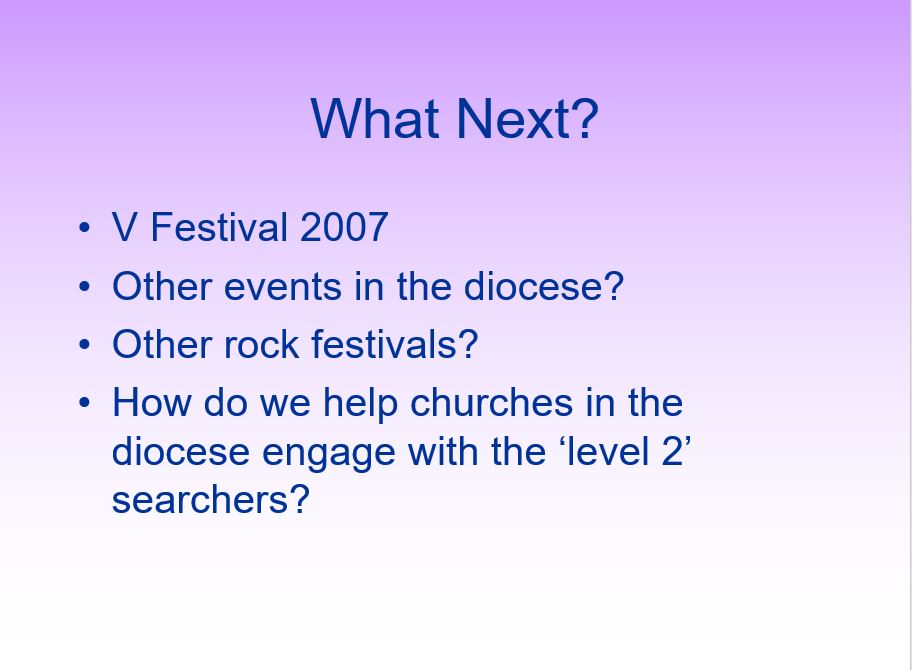