A few days ago I was standing in Pedu’el, an Israeli settlement close to the biblical site of Shiloh, talking to a Jewish settler, who had emigrated from the USA four years before. He pointed to the skyscrapers of Tel Aviv, clearly visible on the coast, and said, ‘Now you can see why we can never let go of this place, which is part of Judea-Samaria, which God gave to my ancestors.’ Two days later I was sitting across a table from one the PLO’s negotiators in their headquarters at Ramallah. He pointed to a map and lamented that the continued policy of building Jewish settlements in the occupied territories, in contravention of the Fourth Geneva Convention, was strangling any hope of the two-state solution envisaged in the Oslo Peace Accords signed 20 years ago. Both meetings were part of a remarkable study tour of Israel and Palestine arranged by the Council of Christians and Jews. 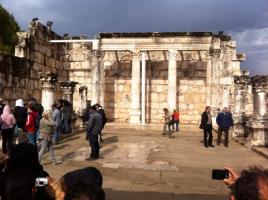 I had been to Israel before, but this tour gave me a completely fresh perspective, which will enrich my preaching and my prayers. Our visit to Shiloh (home of the ark of the covenant for longer than it was in Jerusalem) reminded me how many important biblical sites are situated in the West Bank, and rarely visited by pilgrims. Ramallah is the place where Mary and Joseph realised they had lost the boy Jesus, and is next to Bethel, one of the two shrines of the northern kingdom.

Meeting Palestinian Christians was a highlight of our visit, and underlined for me the importance of making sure that any pilgrimage group doesn’t just visit the historic sites but meets the ‘living stones’ who have kept Christian worship and witness alive for 2000 years in the land of Jesus’ birth. Christians in the occupied territories feel very isolated, and any contact – even just an email – from Christians overseas is highly treasured. Visiting Bethlehem and Ramallah felt quite safe, with good infrastructure and hotels. If each parish pilgrimage chose to use Palestinian as well as Israeli hotels and guides it would give a massive boost to the Palestinian economy, and make it easier to meet local Christians, whose numbers are fast declining.

When I asked a Palestinian priest whether this emigration was caused by the effects of living under occupation or fear of Islamic radicals, he blamed the occupation, telling us what it was like to have one’s movement within the West Bank restricted by constant checkpoints, and by roads designated for Israelis only.

Meeting the professor of middle eastern studies at Tel Aviv university brought home to us that the state of Israel is a very tense society, with divergent views between secular and religious, between the ultra-orthodox and other  denominations, between different languages. In the aftermath of the Arab Spring, many realise the need for Israel to make friends quickly and to understand the culture of its neighbours, and the university is promoting the learning of Arabic. However the government is resistant to people in Israel learning Arabic, even those who settle in the West Bank.

Our visit to one of the few remaining traditional kibbutzim showed that individualism is increasingly a feature of Israeli (as well as British) society.  Our host told us that most kibbutzim have been privatised, no longer sharing common meals, pooling salaries or welcoming volunteers. Interestingly, it is only those with a strong religious foundation which have managed to retain the traditional socialist community ethos.

A searing morning at the Holocaust memorial at Yad Vashem helped me understand the deep-rooted insecurity felt by Israelis – as did the Israeli on the Gaza border crossing who pointed to his forearm and said. ‘Never will I allow anyone to tattoo a number there.’ 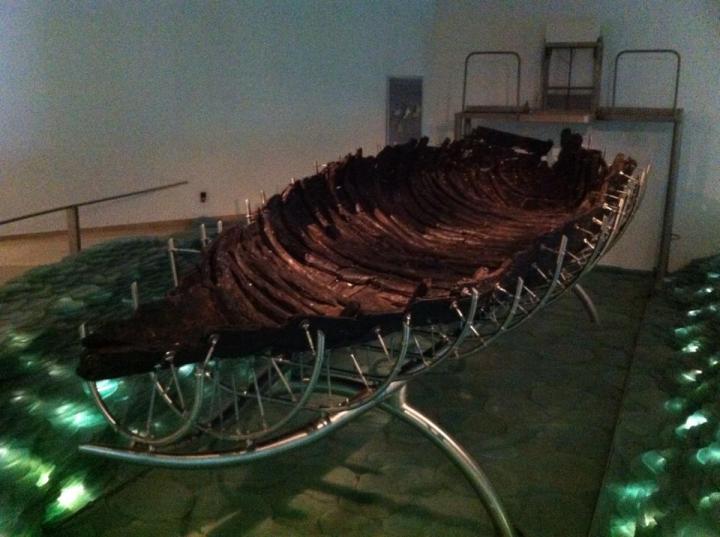 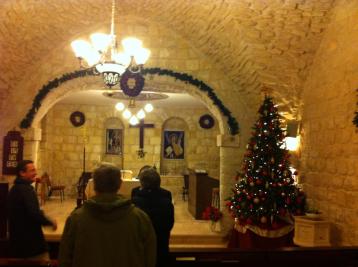 And yet peace requires justice. One of our tour was a priest who has served in the British army and is an expert in human rights law. He helped us to see the lesson from Northern Ireland – that both sides need to make huge compromises for peace, and also to confront the dark side of their own history. Israelis have a deep fear of terrorism, yet acts of terror were part of the birth pangs of the modern state of Israel. Until hope is given to the desperate people of Gaza it is unlikely that the long-suffering residents of Shderot, on the Israeli side of the border, will be able to face a future without the fear of rocket attacks.

As our unforgettable tour drew to a close, my mind went back to a bidding written at the entrance to St. George’s Cathedral in Jerusalem: Pray not for Arab or Jew, for Palestinian or Israeli, but pray rather for ourselves, that we may not divide them in our prayers but keep them both together in our hearts.

For more information about planning an ethical pilgrimage to Israel, visit http://www.churchofengland.org/our-views/international-affairs/ethical-pilgrimages.aspx